Last week I published a paper I wrote with Jay Allnutt about the impact of Teach First on GCSE attainment. We received a large amount of feedback on the paper, via a seminar presentation at BERA conference, comments on a blog I wrote, twitter and email. Rather than simply present these research findings at researched2013, I showed the audience some of feedback we received on the paper from the education community to reflect on how research can move forward understanding of major education policies. This blog gives an approximate overview of my presentation at researched2013, following on from Joe Kirby’s @joe__kirby blog of his talk.

The paper I published with Jay Allnutt showed that schools participating in Teach First improved their GCSE results. In their second year of participation, the improvements were in the order of one grade in one of a pupil’s best eight subjects (5% of a pupil s.d.) or a two percentage point gain in the % achieving five or more GCSEs at A*-C (incl. Eng and maths).

Making these sorts of claims was not straightforward because…

…Schools were not selected at random to join Teach First

I think all new education policies should be randomised in their implementation, providing it is possible. Teach First received substantial government funds so has a duty to taxpayers to demonstrate its effectiveness. This was a major failing on the part of Civil Servants who agreed to fund it (Sam Freedman @samfr spoke eloquently about this issue). Rather than recruit school’s from 20 local authorities in London in the first year of the programme, recruitment should have taken place across a randomly drawn lot of deprived schools or alternatively local authorities should have been randomised into the programme.

This did not happen, producing a very serious identification problem because Teach First schools look very different to others – they are concentrated in London, are relatively deprived, were likely to have had particularly severe teacher recruitment problems and may have had headteachers who were particularly dynamic or risk-taking.

We try to deal with non-random selection in our estimation by finding a set of schools that look identical to the Teach First schools, except that they were not participating in the early years:

And rather than simply comparing GCSE performance between our Teach First schools and a matched control group of schools, we run regressions that model changes taking place year-by-year at every school:

The first set of responses we received to our papers asked…

Are there confounding factors?

For this type of criticism to be valid, the timing of the adoption of ‘higher managerial chutzpah’ must have to exactly coincide with the participation in Teach First. (Why? Well, we match on change in GCSE scores so their superior performance cannot have preceded the programme and we perform falsification tests, which demonstrate that Teach First did not have an impact in the years before the school joined the programme.) But more importantly, if our findings are entirely due to ‘higher managerial chutzpah then we would not witness positive effects of Teach First for those departments who received TeachFirsters, compared to those in the same school who did not. 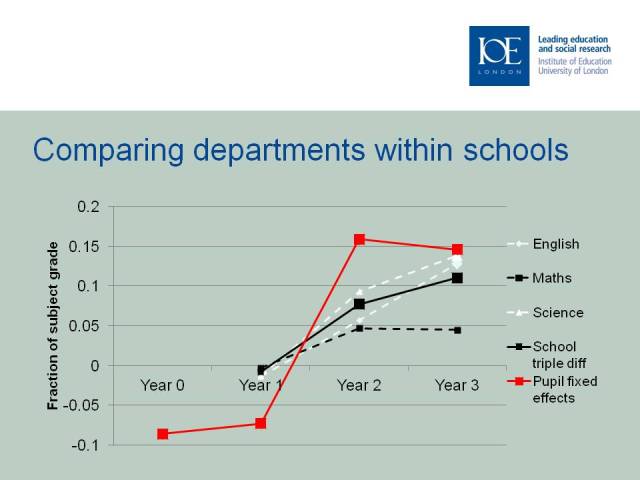 The next set of feedback we received claimed that…

The effects are too small

It seems most unlikely four [Teach First] teachers can raise the attainment of a school or department single handed by teaching their pupils better, not least as they simply do not teach enough pupils.

Does ‘5% of a standard deviation’ represent significant and positive impact?

[@David_Cameron76 on twitter and in the audience at researched!]

The effects are too  small, given costs

Are these estimated marginal benefits worth the massive public subsidy that @TeachFirst receives? I don’t think so

We don’t answer this question in our research paper, but I hope we’ll be able to in a new Nuffield-funded project I’m working on which is led by Ellen Greaves at IFS. We’ve been asked to look at the relative costs and benefits of all the different teacher-training routes. There are two major impediments we face: no national database of school and departmental participation in PGCE programmes exists and SCHOOL DIRECT WAS NOT RANDOMISED (@samfr – this happened your watch did it not? Why no randomisation to stagger roll-out?).

Some commenters on our research did not believe our findings because…

Your research is clearly biased

I have no interest in Teach First in the sense that I wasn’t paid by them to do the research, I trained as a teachers via a traditional PGCE and the wider ‘narrative’ of the research I do isn’t underpinned by a theoretical view that programmes such as Teach First are likely to be successful. My co-author was trained by Teach First, worked in a secondary school whilst he conducted this analysis, and now works for Teach First. If people believe our research is biased it is hard for us to persuade them otherwise. It isn’t enough to claim that scientific and quantitative methods are less susceptible to bias, but this isn’t true (see this article on how doing maths is influenced by political beliefs). We should have been required to declare our methods – our outcomes variables and regressions we planned to run – before we conducted the research, as EEF evaluators are required to, but we didn’t.

We also had the usual comments from people who ask…

Can we ever ‘know’ anything?

You identify so many potential caveats, influencing factors, limitations to the validity of the methodology and other potential problems it is hard to take your findings seriously.

Paper ‘estimates’ benefits. Others claim them as facts.

Can you really claim direct causal links? Your paper is rightly tentative the headlines are not.

There are philosophical questions about what knowledge and causality are; I’m not the right person to blog on these things. But my problem with the commenters above is that by invoking the ‘it is not causality’ argument, they are taking a value position that there is still no evidence that Teach First works. For me, research on policies should simply aim to shift the balance of probabilities on whether they work or not. Does our research alter the balance of probabilities that Teach First works? I think it does, though we can argue about how much. Am I convinced enough of my findings that I’d be happy to suggest to a headteacher that they join the programme? I think I would (though if they were really reluctant I definitely wouldn’t push it!).

Some commenters rightly ask what the ‘thing’ is that we’ve identified, or…

How should we interpret the effect?

(My response: This is just part of the Teach First effect so we don’t want to ‘account’ for it in our estimation!)

I don’t think you can compare to other ITE methods, as not part of study?

What if the ’cause’ is involvement in “ITE” for a school/department & not “TF“?

(My response: Great question! And we’ll be able to say more about this once we’ve completed our Nuffield project)

Have you proved that Teach First impacts on poor kids within these schools, as opposed to other kids?

[a question at researched2013]

(My response: Great question! Let me crunch the data and get back to you)

Now we start getting onto the really important questions, as raised by @samfr in a blogpost…

How might Teach First plausibly change the pupil experience? 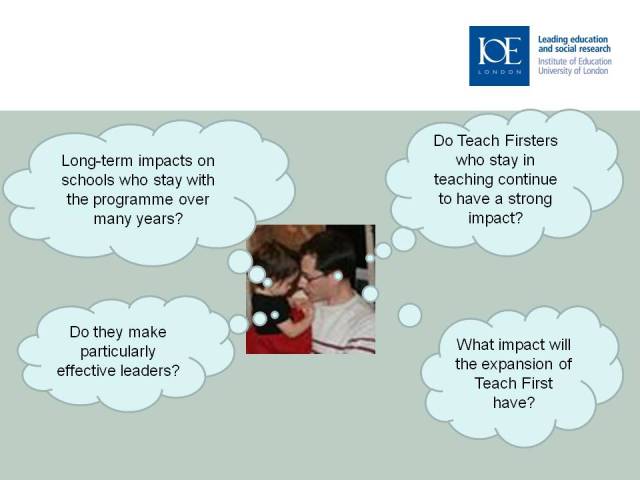 And we had a few more great questions from the audience at researched2013:

Have PGCE courses seen a deterioration in applicants due to Teach First?
Why is Teach First more appealing than a PGCE and what role does the salary versus student loans play in this?
How can we know if Teach First or PGCE applicants have the qualitatively superior characteristics?
Is a major advantage of Teach First the two year length of the programme, compared to just one year for a PGCE?

2 thoughts on “How can we learn if Teach First is working?”